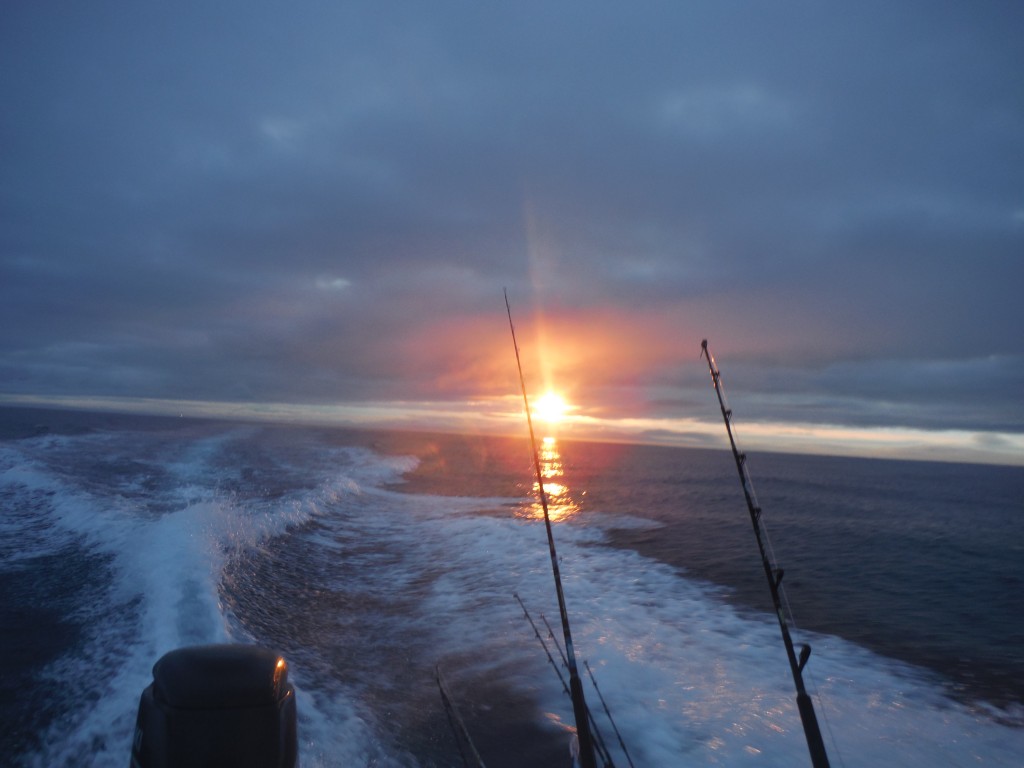 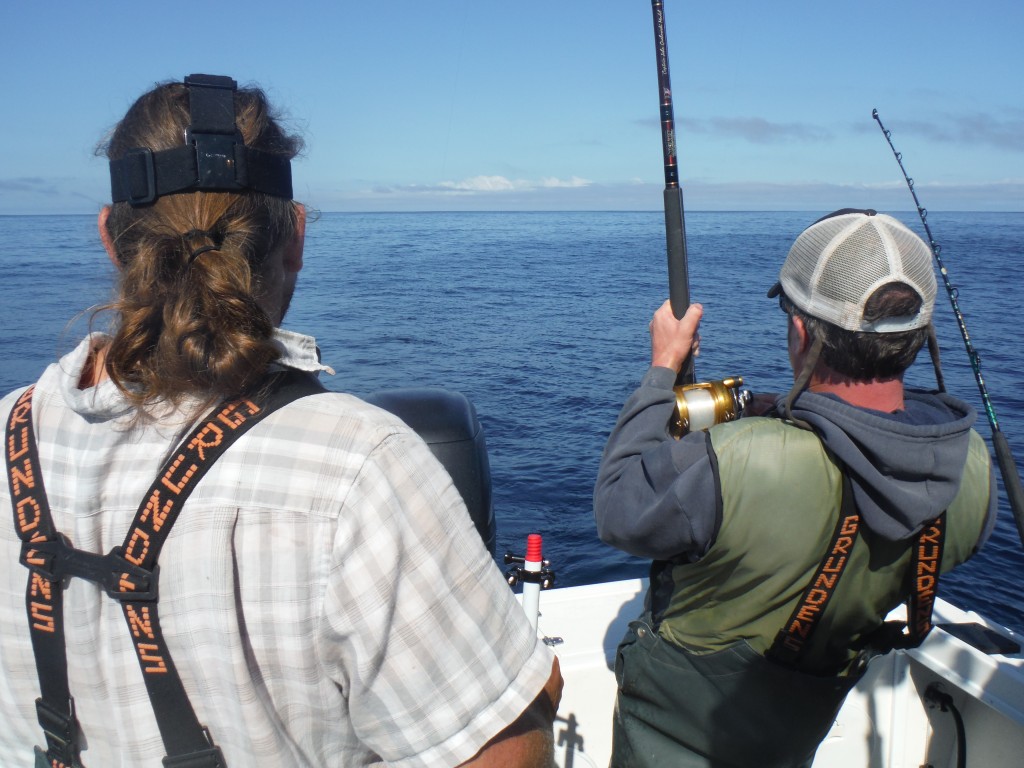 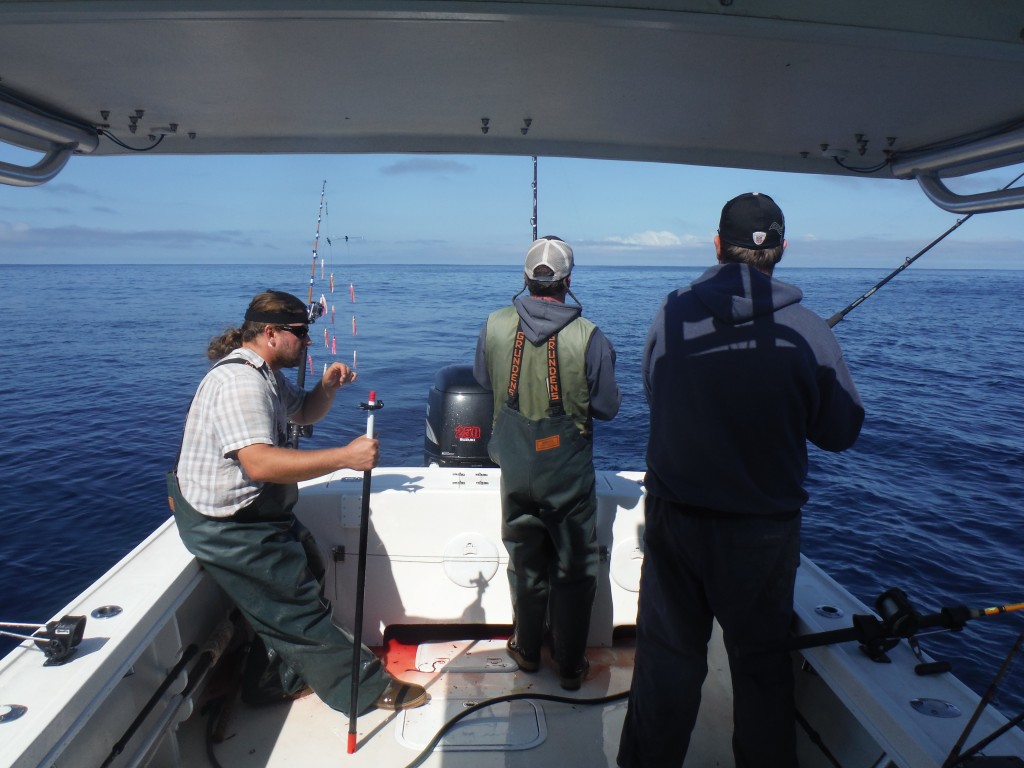 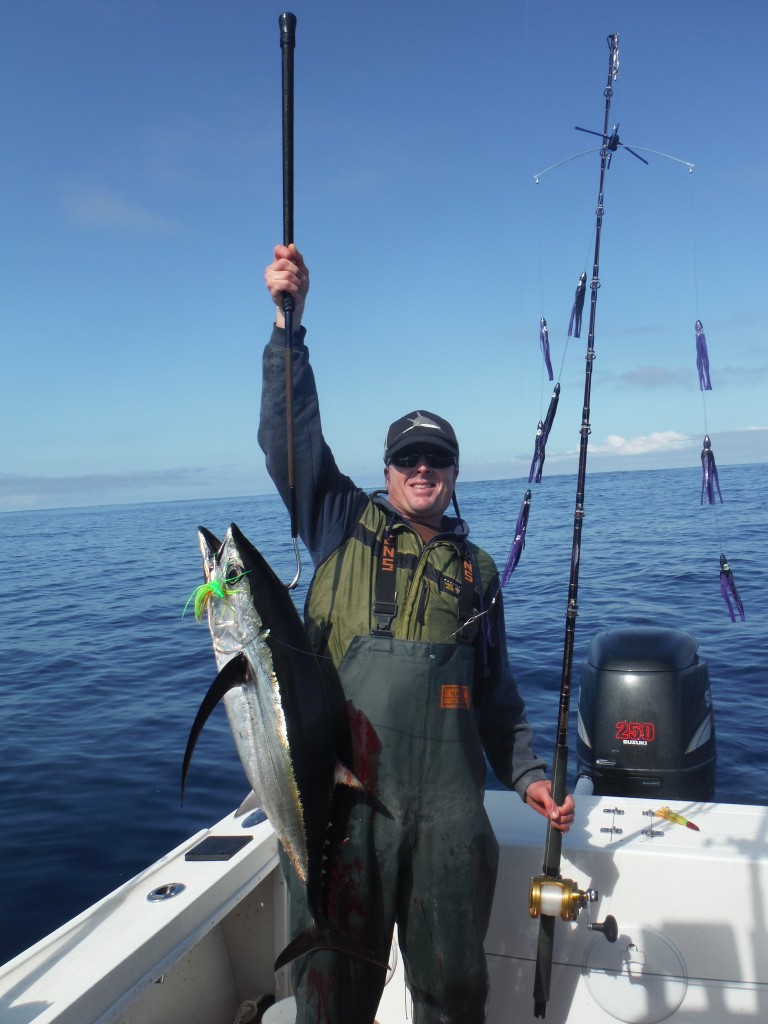 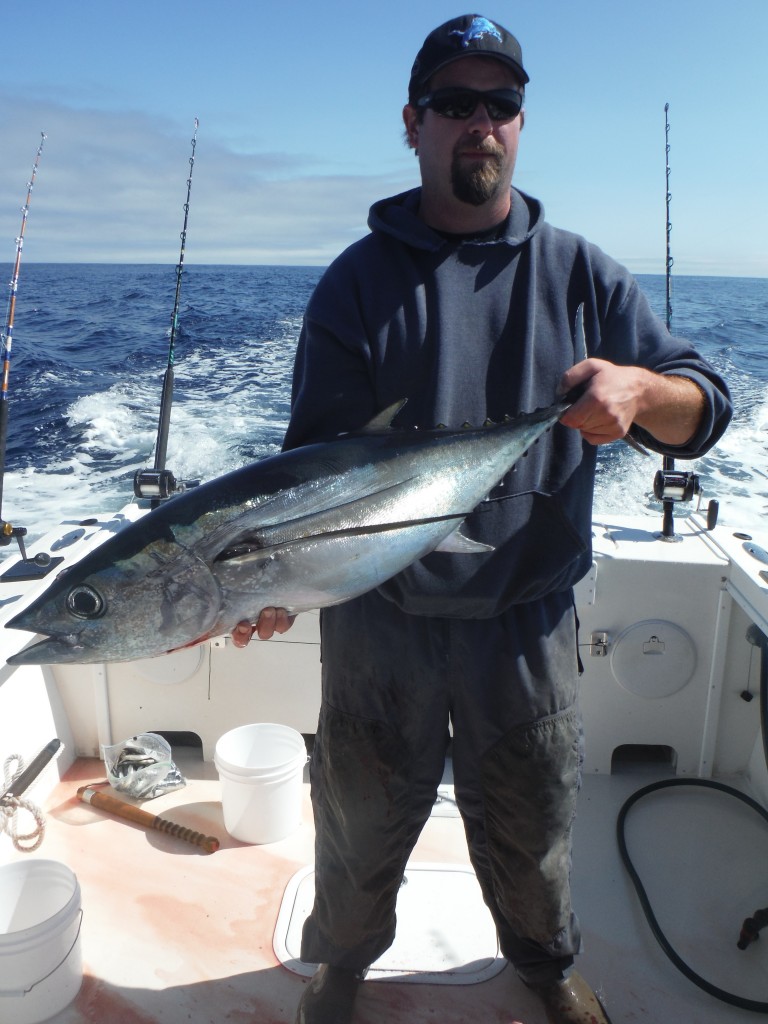 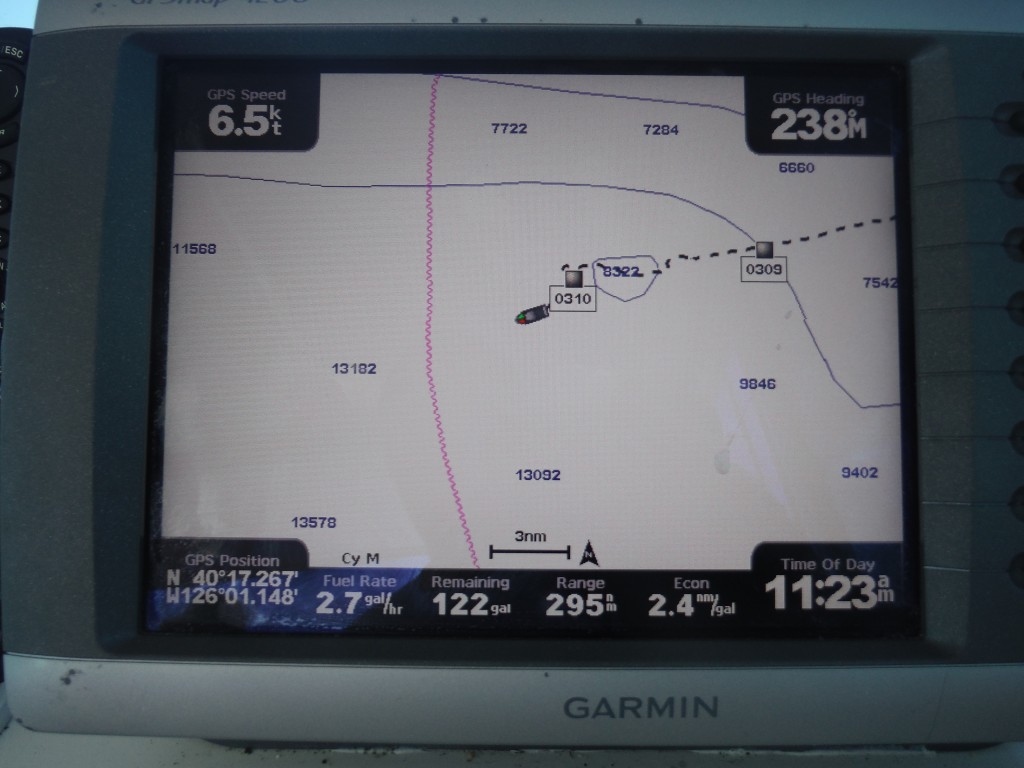 It was good to be back on the tuna grounds…… finally! With the rough weather and commercial fishing obligations on the past flat weather days this year it finally lined up for my turn to run. Long way but the ocean was real nice and Scrimshaw made a long ride a nice one. I had an all star crew with Bobby, Seth, and Matt of Redwood Coast Spreader Bars http://www.redwoodcoastspreaderbars.com/default.asp . We left the ramp just after 545 heading to 40.20/126.00. We were showing 82 nm to the target… a little bump on the mendo ridge where the water has been stalled the last 2 weeks or more. It had it all; great chlorophyll, temp, and structure. With a couple days of south flow I was hoping it pushed in but was also hoping it stayed just like it did and didn’t get too mushy which makes a short day even shorter by needing to cover more water to find the fish. We found that it was pretty much there although may have been shifting south looking at the satellite shots from yesterday.

With this being the first trip to the tuna grounds aboard Scrimshaw it took the first 1/2 hour feeling out the boat… seeing what I thought of the new prop I put on a couple days prior, the weight distribution, and the economy. It was great to have good guys on the deck that understood that this was a long bomb and we needed to keep it going to maximize fishing time on the grounds. They shifted deck weight around as I was getting the feel of her loaded for a tuna run.

The ocean was very nice and we ran out around 24 knots and got a bit more speed and economy when we got a 5 knots of wind to create a ripple and break the surface drag of a greasy ocean on the hull of Scrimshaw. We got about 75 miles out and the temp climbed where it should. In the fog we couldn’t see life and as we came out of the last fog bank we started to see birds and life. We slid on our first kelp with a tern sitting on it and threw some irons. Nothing home. I stood on the bow and looked around 82 miles from the jaws on a perfectly still, blue, sunny, flat ocean and just smiled for a minute. That was over, it was time to toss the troll gear in and find the target species.

We trolled west across the high spot at the 126 line and kept looking. An hour later I was doing the head game…. keep going west? north? south? maybe the water drifted? For 2 weeks the water had been showing purple blue water on the satellite shots….. that was what I wanted. We dug southwest into the break to find it… ZZZZZZZZZZZZZZZZZZZZZZZZZZZZZZZ after the rapala rod started ripping and spun in its holder, I looked back to see the full scoop RCSP spreader bar get a hole blown out behind it…. it missed. It hit again and stuck, purple cedar plug starts ripping as does a RCSB whiskey bar…….. quad on!! I love quads……. the sounds of four or more reels singing is just really nice for us offshore junkies! We get 3 of the 4 with the cedar plug fish coming off in true cedar plug fashion.

Back on the troll its time to box the area, hopefully we are onto something. We clover leaf it and find nothing else. Keep going, chasing rips and birds and looking for signs of life and debris to troll past. We dump our deck fuel in and strap the tanks to the top of the boat, clear the deck and are ready for battle for the next 7 hours we have till run time. We dig a bit further southwest and then tack northwest. I’m confident we will find the purple water. We see a foam chunk with a tern and we see some flashes under it as we troll past…. double hook up. One comes unbuttoned. Box the area for no more.

So we keep trolling and look past the port bow and see jumpers…… swing on them and ZZZZZZZZZZZZZZZZZZZ double hook up. Dump a swim bait and let it drift down. We have been tossing chum on all debris and hookups and finally got a bonus fish to hook up on the swimbait as Seth was working it. We get a quick tangle with the marauder line and then 2 fish together. Pull on that rapala fish gaff it it’s in now we just need to cut the rapala off and get the other fish free of the rapala line. I look at which on to cut twice and cut the wrong line…. there goes the fish Matt was pulling on with a purple, zuker broom. Errrrr, that was the dumbest thing I have done all year. So we get right back on the troll and the pink and orange full scoop bar get hooked up in seconds and then comes unbuttoned a few seconds later. We continue on.

I still think we will find the purple water if we keep going out and up as the shot has shown for weeks and I also want to see if they bite better on the north side of the ridge. Another double in there somewhere and we keep going. It’s another 1/2 hr troll up and an hour back down before we get another fish. A single on a X20 Rapala. It is now getting late and we need to troll toward the barn to cut a few miles off the run. We hook a double, first to go is a full scoop spreader bar and then a PCP…. purple cedar plug. We almost get um both but another tangle. We get it clear and on a final run the cedar plug fish popped the line. I think the spreader bar had been chafing the line prior when we were trolling. We were still figuring out the best spread as this was the first tuna run on Scrimshaw. Lesson learned. It now 5pm and I turn back west to try and box the area…. we toss chum and get back on our heading home. We troll till 545 and clear lines. Short corners first, next the spreader bars come out, then the cedar plugs, then slow the boat wind up the rapalas and smile as we did what we wanted to do. We get her up on step and get settled in for the long ride home. We ran mostly around 26 knots the whole ride home as we had a bit bigger swells that would push us faster past 30 knots along every 4 or 5 minutes.

We fished the north and south end of the Mendocino ridge at the 126.10 line. Most fish came along the south end of it in an area from 40.16 – 20 and 126.01 out to 126.10. Most bites were associated with a piece of debris, kelp or floating foam, garbage, ect. All the fish were 25 to 30 lbs… I’m guessing one or 2 were 32 or 33 lbs. We’ll say nice big ones for this time of year for Eureka albacore. They bit best on purple colors. The Redwood Coast Spreader Bars products outfished the other gear today. I feel spreader bars help get us more by raising fish but rarely do they actually catch better than the rest of the spread. We ran 3 bars….. 2 whiskeys longer in the mid spread and a full scoop in close just behind the corner brooms on flatline clips. We had 5 bites that didn’t make the boat for various reasons…. that is more than usual I would say. The fish we did get were mostly hooked close to the lips and not really deep. When we pumped the stomachs they had a mixture of 4 inch finbait, small pink shrimp, and some small 2-3 inch squid in them. The swimbait fish had our chum in it’s stomach. The boat did well and raised fish. I will reflect on some of the spread and make some changes for the next tuna run…… takes a bit of playing around to fine tune a new boat spread but we are close.

The grade made up for the quantity. We never found the purple water. Looking at the shots from yesterday I see that the water drifted south and if we chose to go southeast out the break, which was plan B, we likely would have found the purple water with better temps and hopefully better fishing. In the tuna game you can only do what makes sense with the information you have at a given time and be happy with your decision. I am happy with the ground we covered as we only had a limited time on the water with the distance we had to run both way. I will be running tuna charters as soon as the water gets closer to 60 miles as long as the weather lets us go. I have a “tuna list” if you are interested in going, just call or email and let me know you want to go and what days are best for ya. I expect we will be running quite regularly for tuna starting the last week of Aug through Oct. Sept is usually the best month for weather and tuna fishing with the possibilities of exotics quite high this year with how warm the water is. It is just beginning. I’ll still be running salmon and rockfish trips until the weather lays out again then, it’s off to the tuna grounds again.