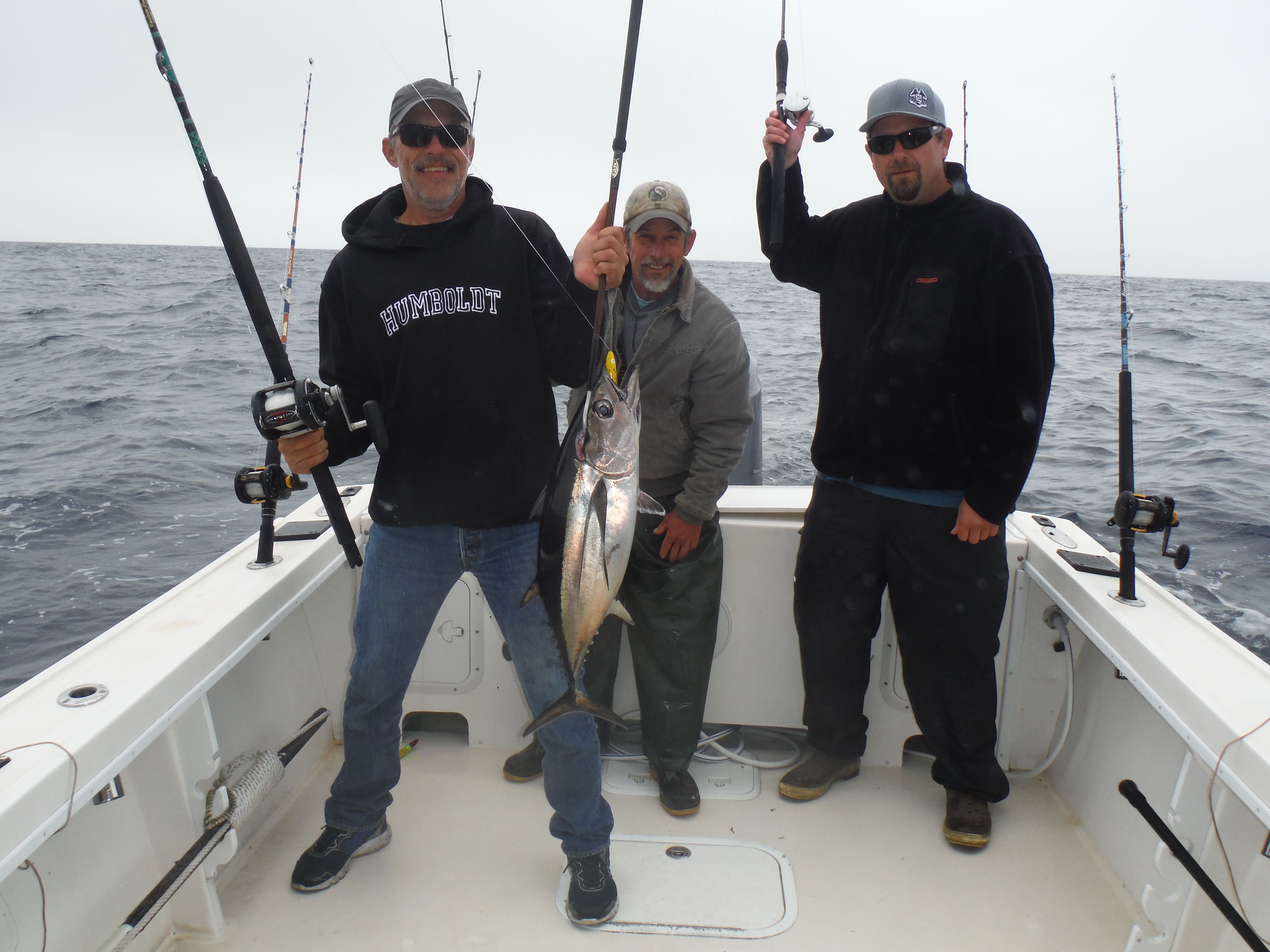 Been on the water a lot with the last week finally being nice on the ocean and had some slow to decent pacific halibut fishing, great rockfishing, and found an albacore on our first trip of the year. Read on for all the details of the tuna trip or call to book a trip if you want to get a spot before summer is over for salmon, rockfish, tuna, or halibut. There should still be quota for pacific halibut for Aug and maybe sept. 707-601-3474

A few days ago I was surprised to see how fast the water moved in, from 85 to 60 miles in 3 days. I had an open Tuesday and the forecast kept getting better. I got a great crew set up including the Opah slayer from last year – Chuck, the spreader bar guy Matt, Bryan S from the Humboldt tuna club and his father in law. I was not quite ready with all the gear as 6 of the troll reels didn’t have fresh line yet but after Mondays trip I got iced, fueled, loaded and printed out the latest terrafin charts and hit the hay. We had a nice ride out, not the fastest direction to run from Eureka but the ride was 20-26 knots the whole way and no wind yet. We knew the wind was coming at some point but it would be at our tail for the ride in. Four miles from the target of 41.15×125.15 it began from no wind to 15 then 20 knots……we got the gear in and proceeded trolling north. The most life was near our starting area after a half hour oing north it didn’t feel right. We looped inside and down and then southwest. Early season we always say “when in doubt, head out”. I was afraid the water moved in so fast the fish did not come with it yet, I’ve seen that a lot over the years. It’s never the best to fish the last day or the weather window as there is more water to cover the first day is always the best when the are stacked at the break. We figured we’d find some in there somewhere.

At 1040 we heard the starboard outrigger load up and pop the clip and then that familiar sound of zzzzzzzzzzzzzzz. We were just talking about how it will be out of no where and Matt just popped a beer so it was timely. Steve reeled in the first albacore of the year on Scrimshaw. Nothing huge but a nice 15 lber better than a peanut. Ate a long dorado cedar plug off the outrigger. We kept working out toward the SW, the direction the hottest water pushed in from. We made it to the 11/27 then headed back north. We trolled north and then we pulled the spread and ran to the top of the break. We had to check the north end of the break where there was a 6 degree break. We found the break around 25/20 then turned to work back down it with the wind at our back. We came across where we had our one and only fish in the morning at 430 in the afternoon and started to stack the gear and get the outriggers down. We had a sloppy ride in with a quartering 3-5 ft wind chop at our port stern. It was a better ocean inside of 30 miles.

We fished in 59.5 to 60.5 degree water all day a couple cooler patches here and there. The best bait was at the break on the SE side. There was some deep bait at 40-60 fathoms and some tuna marks at 40-60 fathoms throughout the water and the day. The fish had a single saurie in it’s belly. There was a lot of breezing sauries inside and at the break, 6 to 8 inch size so I think there is feed for them to find when the break realigns. We may have got a little more action if we stayed at the bingo spot but I feel real good about how we covered that piece of water with the weather and info we had. There was 15 knots of wind all day with some gust over 20 and it backing to 10 knots for a couple times to. We made it there before the wind started and that was nice. We’ll see what the blow does to the water, it needs it and then we will go again when the schedule and weather allow. Hopefully in a couple weeks. It was great to be on the bluewater again with a great crew and to hear the reels (a reel this time) singin!

The short version – we got 1 albie 60 miles NW of Eureka on Tuesday July 12th on a dorado colored cedar plug long off the starboard outrigger.
Marc 707-601-3474